THE TRANSGENDER PROGRAMMING OF CHILDREN IS CHILD ABUSE. (HELIODA1)

The transgender programming of children is child abuse, 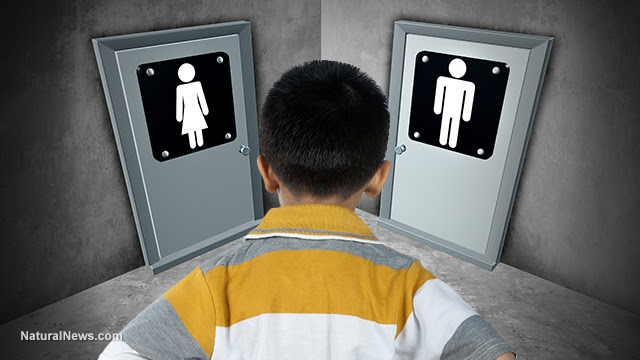 Learn more:  http://www.naturalnews.com/054053_transgenderism_gender_confused_children_mental_health.html#ixzz48xihpOja
(NaturalNews)
So this guy walks into an OB/GYN clinic and demands a gynecological exam.
The doctor, a woman, takes one look at him and says, "That won't work. You're a man."
The man, however, "self identifies" as a woman and blasts the doctor for being a bigot. "I self identify as a woman," he says. "And I demand to be treated as a woman, or I'll call my civil rights lawyer."

The doctor, not wanting to be called a bigot, proceeds to give the man a fake gynecological exam, playing into his delusional distortions about his own biology and arguably worsening his mental disconnect with his physical self.

This is what transgenderism and "biological subjectivism" has come to in America today...
a politically correct demand
that everyone agree to
participate in the mental distortions of a few individuals who suffer from a psychological disconnect from their biological realities.
Such ideologies stand in complete contradiction to the known science on biology
and physical reality,
and sadly,
this mental distortion is now being thrust onto children as part of a sick, demented political agenda to appease the most lunatic fringe elements of the political spectrum.
[SATANIC AGENDA]

That agenda
now demands that public schools be
turned into transgender child factories,
churning out confused, suicidal children who are physically and chemically mutilated by
a society that applauds them for denying their biological reality.
[A CRIME AGAINST CHILDREN]
This entire agenda, now being waged against the children of America by politically motivated cultural arsonists,
is nothing less than
a crime against children.

The science is clear:

"Human sexuality is an objective biological binary trait,"
explains the American College of Pediatricians.
"The American College of Pediatricians urges educators and legislators to reject all policies that condition children to accept as normal a life of chemical and surgical impersonation of the opposite sex.
Facts – not ideology – determine reality."

When President Obama orders schools across America to normalize transgender confusion in children,
he worsens that confusion in the minds of children who are still grappling with their biologically driven gender identity.
"A person's belief that he or she is something they are not is, at best, a sign of confused thinking,"
explains the ACP.
"When an otherwise healthy biological boy believes he is a girl,
or an otherwise healthy biological girl believes she is a boy,
an objective psychological problem exists that lies in the mind not the body, and it should be treated as such.
These children suffer from gender dysphoria."

Although liberal ideology can pretend that transgenderism is a "third sex,"
this is fairy tale thinking.
There is no third sex.
And a man pretending to be a woman does not make that person a woman.
Hence, "biological subjectivism" is delusional thinking.
Yet it is a delusion that is being thrust upon the entire population via shaming tactics of political correctness.

Alarmingly,
this politically motivated transgender agenda has now invaded our schools, where vulnerable children will be easily swept into the confusing,
abusive world of chemical castrations and genital mutilation surgery while being
applauded by obedient conformists for having the "courage" to deny their biological existence.

And so we now live in a nation where child-abusing parents who need to be locked away in mental institutions are turning their children into gender confused basket cases who may also end up needing psychiatric intervention.
This is how the cycle perpetuates,
and
the political powers in Washington are encouraging this cycle of mental illness,
child mutilation and horrible suffering among children who are now being shoved toward transgenderism
because it appeases the perverse political appetites of mentally ill adults.

Conditioning children into believing that a lifetime of chemical and surgical impersonation of the opposite sex is normal and healthful is
child abuse.
Endorsing gender discordance as normal via public education and legal policies will confuse children and parents, leading more children to present to "gender clinics" where they will be given puberty-blocking drugs.
This, in turn, virtually ensures that they will "choose" a lifetime of carcinogenic and otherwise toxic cross-sex hormones, and likely consider unnecessary surgical mutilation of their healthy body parts as young adults.

Keep in mind
that encouraging children to pursue transgender ideologies eventually
leads to chemical castration and / or genital mutilation via surgery.


Yet when society coddles gender-confused children and encourages them to change their biological sex through chemical castration and surgical mutilation, it deprives such children the opportunity to explore, learn and grow beyond their early confusion.
To declare a child to be a "transgender" in need of chemical and surgical mutilation is
a crime against children.

As the ACP explains:
"Never has it been more scientifically clear that children and adolescents are incapable of making informed decisions regarding permanent, irreversible and life-altering medical interventions.
For this reason, the College maintains it is abusive to promote this ideology, first and foremost for the well-being of the gender dysphoric children themselves, and secondly, for all of their non-gender-discordant peers, many of whom will subsequently question their own gender identity, and face violations of their right to bodily privacy and safety."

Transgenderism,
says the ACP, is "child abuse"
and
a kind of mental illness.
Its very ideology exists in contradiction to physical and biological reality, where chromosomes determine biological sex, and nearly all children eventually learn to accept the reality of their physical bodies, even if they are temporarily confused.

The transgender programming of children is a politically motivated agenda
to cause an acceleration in gender confusion and distorted gender identities among the population.
It is rooted in a fundamental mass mental illness of a delusional society, where "reality" is now played out via political memes
and social media shaming rather than biology reality or even the real world of nature all around us.

When it comes to physical biology, the answer is clear:
Sex is binary.
You are either born with male biology or female biology.
There are extremely rare cases of hermaphroditic genetic expression, but this is not a "third sex."
It is a genetic and / or formative disorder.

Mother Nature
intends for all humans to be born as either male or female.
It is self-evident in the genetic code, the biochemistry and the reproduction of the species.
To teach a child that he or she exists in contradiction to the biology they were born with is
a violation of nature and a form of mental abuse against those children.

Children need to be connected to their bodies and learn to accept and honor the "hardware" they were born with.
To teach a child that they are disconnected from their biological self is
to invite and encourage runaway shame, peer ridicule and tortorous mental illness in that child,
which is one reason why suicide rates are so alarmingly high among those who pursue a transgender lifestyle.

Thanks, Obama,
for not just screwing up our entire economy, our justice system, our community policing, our foreign policy and our border control.
Now you're screwing with the mental health of our children, too!
Got any more destruction planned before you leave office?