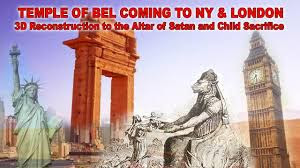 They used to all it GAIA, the universal world, UN sponsored religion.

Now, it has been announced thta U.N. to install 1000 Satanic Baal temples this month.

Non-Satanists are in immediate danger.

Dr. Roert Muller’s clearly outines his vision for a New “Going Green” Religion on his websites

In one article he recalls a conversation he alleges to have had with God.

Before I continue with Muller’s proclamations, it should be mentioned that he is a long time friend of the Clintons.

He is also responsible for much of what was in No Child Left Behind and what now call Common Core.

Muller asserts that he told God the following:

“Well, my most important idea and conclusion after all my adult life as a world civil servant is this:

The United Nations must be vastly strengthened to resolve the major global problems henceforth increasingly confronting humanity and the earth.

It must be empowered to adopt and enforce world laws and regulations.

Let us perform this miracle in the House of Mica, on the shores of the River of the Rising Sun, wherefrom our indigenous brethren prophesized that a civilization of peace will extend to the entire world.

1990s a group of interfaith dialogue proponents decided to organise a centenary conference to be held in 1993, also in Chicago.

Dr Muller was one of the primary founders and organizers, of a conferenced called the  Global Ethic Foundation.

This conference, held in 1993, had as its purpose,

was to engage in pushing the concept of human global consciousness.

is also one of the key figures behind the drive to establish a universal global consciousness and according to him,

global consciousness will be established through a mandatory, universal world religion.

This is precisely what the Pope caused such an uproar when he was declaring, in September of 2015 when he stated

all religions are equal.

Robert Muller have advocated for one universal religion.

Eventually this goal was manifested by the United Religions Initiative (URI).

is the author and please note the cooperation of the Clinton Foundation.

It is quite clear, when one reads

the preamble of this Agenda,

that globalists don’t care about God, this is the institution that they will use to impose the UN Agenda 21/2030 goals of sustainability.

Excerpts from the Preamble

We respect the uniqueness of each tradition, and differences of practice or belief (all religions are equal).

We unite to heal and protect the Earth (the marriage of world religion and technocracy- environmentalism).

The root of this ecological crisis is a spiritual crisis (justification for the marriage of religion and environmentalism).

..spiritual values and moral imperatives help humanity to rediscover a reverence for all life and respect for the sacredness of the whole of Planet Earth.

Therefore, we call for interfaith cooperation in furthering this vision for love and protection of the Earth, reverence for life, and harmony with all living beings

(the establishment of a one world, mandatory religion, designed to usher in a New World Order which will control everything).

The Temple of Baal Is Not Only Satanically Inspired, Muslim Inspired As Well

which inspired by Baal, first appeared in Salman Rushdie‘s novel was inspired by the life of Muhammad.

Rushdie commonly uses magical realism and relied “on contemporary events and people to create his characters”.

Interestingly, the title of the book refers to the satanic verses,

a group of Quranic verses

that allow intercessory prayers to be made to

Can it be anymore clear?

makes direct links from Baal to Islam with multiple links to the Quran.

is a name used in the Bible commonly referring to an idol worshiped by the Jews and many nations around them on many occasions just before the moral degradation.

the sacrifice of children

This demon can make internal objects to become invisible.

we are allowing the perverted United Nations to erect these Temples on American soil?

The Temple of Baal

is a huge step forward with regard to the enslavement

ultimate population reduction of 90% of humanity.

Does it make sense why George Soros once gave two million dollars to the North American Man-Boy Love Association.

This philosophy has taken over the administration.

Does tis explain why the the Obama administration has been overrun with Muslims in DHS and other areas of the Executive Branch?

Is this why the base camp belonging to ISIS, eight miles from El Paso, has not been dealt with.

Is this why child sex rings proliferate in American and the UK?

The Role of the Temple of Baal

I interviewed Dr. Ted Broer and my head is still spinning with regard to the depth of information set forth by Ted.

From examining the available information and Dr. Broer’s presentation, it is clear

that Baal has an interesting history.

In the following video, Dr. Broer details these occult connections between Baal and abject perversion under the color of an unifying world religion.

Maybe this Attorney General Loretta Lynch(mob) said that “we will prosecute anyone who criticizes radical Islam”.

The interview starts 8 minutes into the video.

We are allowing the creation of something that  Shoebat links to the anti-Christ.

the destruction of Americans

This interview is very telling, please share with everyone you know.

An Exclusive You Have To See: The Last Frontier of Free Press Is Here! No More Censorship, Unlike YouTube and Others!