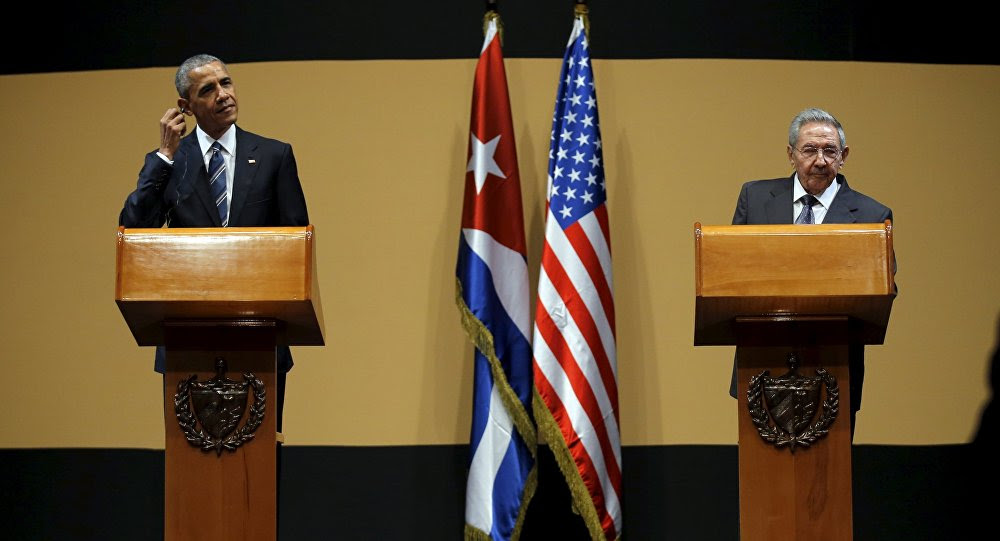 Castro to Obama: Relations Won't Be Normal Until Guantanamo Returned

Meeting with Obama in Havana,

Castro stressed that the US must abandon its territory at Guantanamo and lift its embargo against Cuba.

"Much more can be done if the embargo is lifted," he said.

"We recognize the position President Obama is in, and the position his government holds against the blockade, and that they have called on Congress to lift it."

The Cuban president added that there remain "profound differences that will not disappear over our political model, democracy, human rights, social justice, international relations, peace and stability,"

and stressed that the Cuban people will not "relinquish what they have gained through great sacrifice."

Speaking to reporters, President Obama said he could not offer an exact timeframe for the end of the embargo, but stressed that Washington does not view Havana as a threat.

"What I have said to President Castro is that we are moving forward and not looking backwards, that we don't view Cuba as a threat to the United Statesm," he said.

"The embargo's going to end. When? I can't be entirely sure. The fact that there has been strong support, not just inside of Congress, but also among the Cuban people, indicates that this is a process that should continue."

"We're moving ahead with more opportunities for Americans to travel to Cuba and interact with the Cuba people," he added.

"We are ready to pursue more commercial ties, which create jobs and opportunities for Cubans and Americans alike."

Still, the US does have concerns.

"People are still concerned about [human rights] inside of Cuba,"

"We can't force change on any particular country, ultimately it has to come from within."

While recognizing these concerns, Castro said that no country on Earth can meet all international human rights standards.

He hopes that all countries can work together to meet those standards.

According to a White House press release, the US and Cuba have already launched a joint effort to combat the Zika virus.

"The United States and Cuba have committed to deepen scientific and public health cooperation, focusing on communicable diseases including arboviruses such as Zika, dengue and chikungunya [and]…on the prevention and treatment of Chronic…diseases such as cancer," the White House said in a fact sheet released on Monday.

"In the coming months, the United States and Cuba intend to work toward finalizing arrangements to strengthen our collaboration in these and other scientific and health areas."