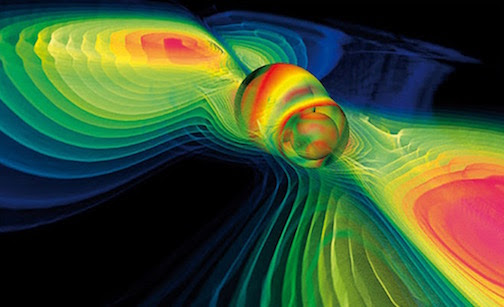 On February 11, LIGO - the Laser Interferometer Gravitational-Wave Observatory - is expected to announce at the National Press Club in Washington DC they have detected gravitational waves from colliding black holes. Some call it the most important breakthrough in modern science.

As expected, such a major novelty comes with intense multicontextual (i.e. symbolic/synchronistic) "whispers". In this article I'd like to quickly point out how this scientific discovery interacts with and was foreshadowed by the passing of David Bowie (Jan 10) and the Super Bowl (Feb 07). 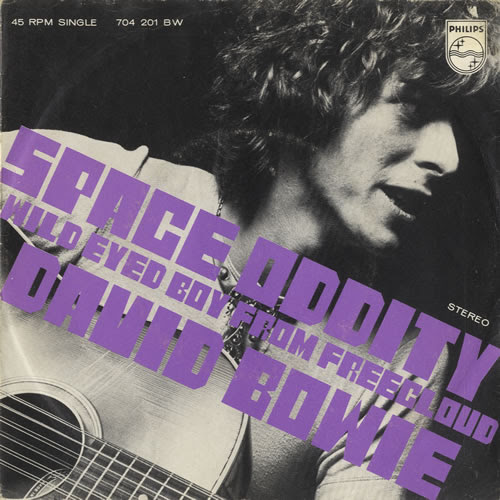 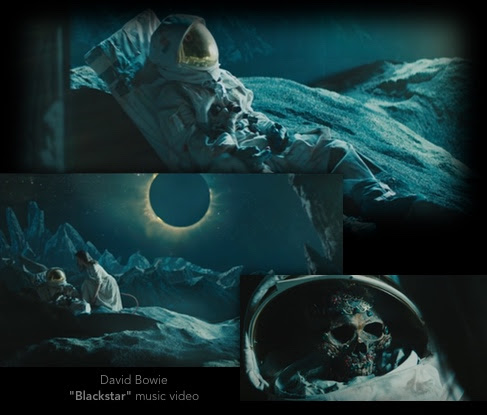 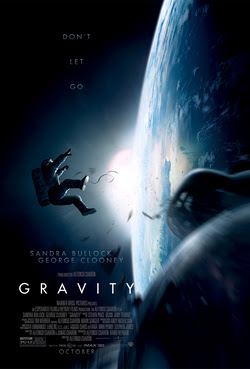 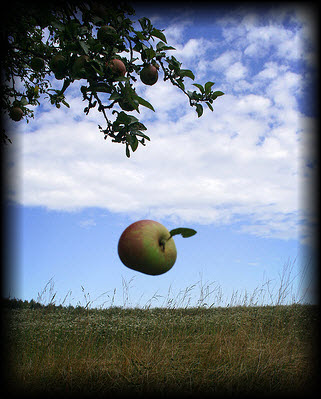 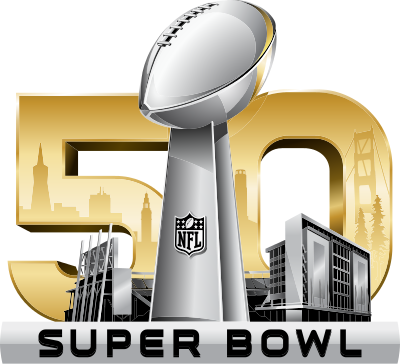 Though a lot has already been said about the heavy symbolism of David Bowie's passingaccompanied by his new song/video & album, Blackstar... 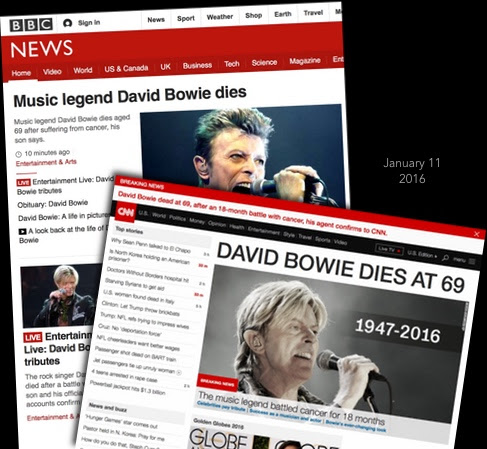 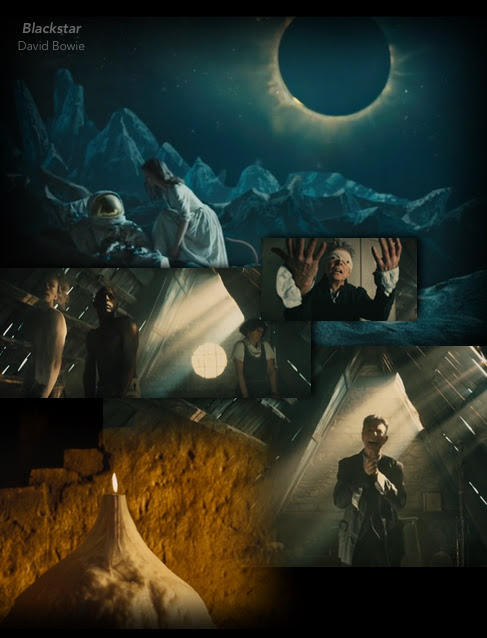 [Blackstar - David Bowie]
...no one seem to have paid attention to the typical depiction of gravitational distortion on the cover of the Blackstar single (song): 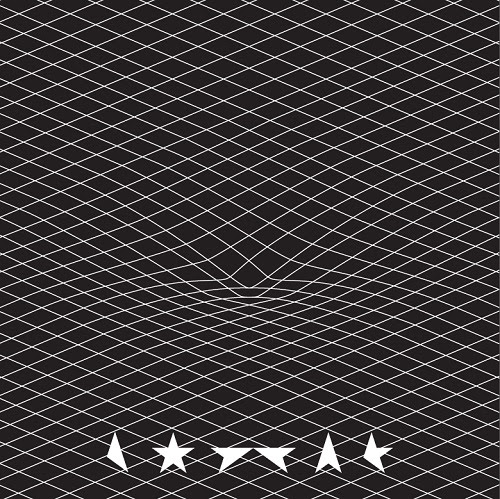 Per Einstein's General Theory of Relativity, massive objects like planets and stars warp the fabric of spacetime around it, producing an invisible pull called "gravity".

Gravity was discovered by Isaac Newtonsupposedly when he saw an apple fall from a tree...

(UPDATE Feb 11: Bowie's Blackstar (song) was used as opening music for the television series The Last Panthers - resonating with the Carolina Panthers in Super Bowl 50 - directed by Johan Renck who also directed the music video for Blackstar. [h/t reader Szabolcs] ) 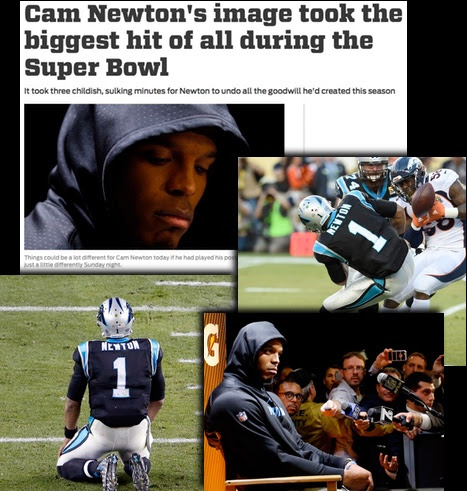 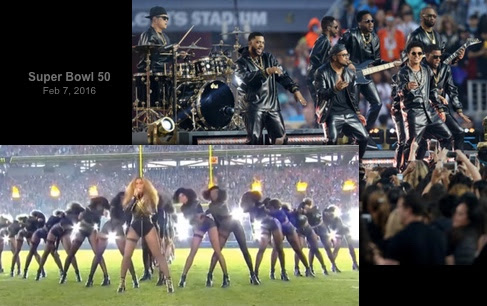 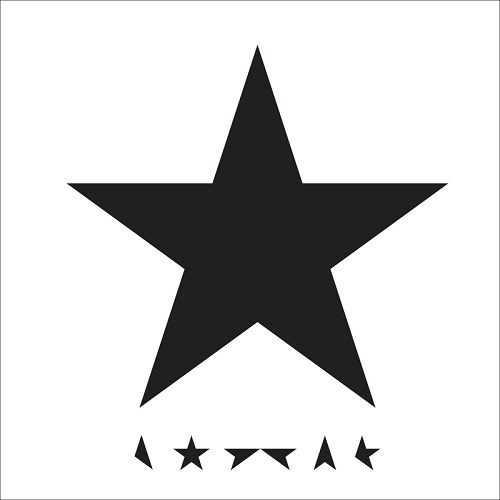 Strong evidence for the existence of Planet X or "Planet Nine" was announced on January 20th, 2016, mere 10 days after the passing of David Bowie and 12 days after the release of his new album Blackstar. 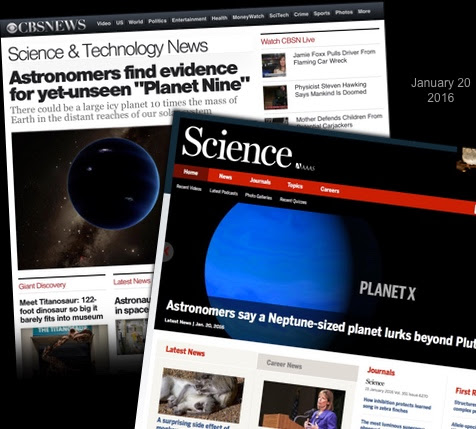 Jan 20 Astronomers find evidence for yet-unseen "Planet Nine"
Jan 20 Astronomers say a Neptune-sized planet lurks beyond Pluto
The scientists did not see the planet.
Instead, they inferred its existence from examining the peculiar clustering of six previously known objects that orbit beyond Neptune, theorizing that the clustering has been caused by the gravitational pull of the hidden giant, Planet Nine/X.
An invisible planet - a "black star" - leaving behind only gravitation effects.

Black holes, by definition, are invisible. They are "black" because not even light can escape their extreme gravity. Not surprisingly "black star"or "dark star" is a scientific term for what is essentially a black hole, i.e. a star whose gravity is strong enough to trap light.
*    *    *
It is in this context that we are seeing this announcement about gravitational waves from colliding black holes, 4 days after Super Bowl 50.

Astronomers may finally have found elusive gravitational waves, the mysterious ripples in the fabric of spacetime whose existence was first predicted by Albert Einstein in 1916, in his famous theory of general relativity.

Scientists are holding a news conference Thursday (Feb. 11) at 10:30 a.m. EST (1530 GMT) at the National Press Club in Washington, D.C., to discuss the search for gravitational waves, which zoom through space at the speed of light. [...]

...LIGO has detected gravitational waves produced by the merger of two black holes. The discovery will be published Thursday in the prestigious journal Nature...

Scientists to announce the detection of gravitational waves 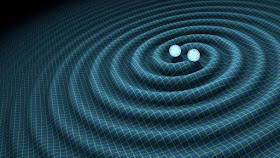 10 February 2016
The discovery could revolutionize physics and astronomy by providing researchers with a completely new way to observe the universe.
According to new reports, researchers are about to announce the detection of gravitational waves, or also referred to as ‘ripples in the fabric of spacetime’.
This discovery could completely change everything we know about the universe, rewriting science books in the process.
Around one hundred years ago, Albert Einstein predicted the so-called ‘ripples in the fabric of spacetime’, even though they have never (until now apparently) been observed directly by researchers.
According to scientists at the Laser Interferometer Gravitational-wave Observatory (LIGO) system – which was built in order to detect the smallest vibrations that passing gravitational waves can give off –
a new update set to be announced this week could prove the existence of the never before seen gravitational waves.
“People are hugely excited.
The rumor is that it’s a whopping big signal, in other words, it’s unambiguous, and that is fantastic,” said Pedro Ferreira, professor of astrophysics at Oxford University, and author of the 2014 book, The Perfect Theory: a century of geniuses and the battle over general relativity.
Finding ‘ripples in the fabric of spacetime’ would mean a completely new way of looking into the furthest and oldest spots in our universe.
The mysterious waves are actually ‘expelled’ out of places like black holes from the beginning of the universe, and having the ability to study them could provide researchers with extremely valuable data about the early universe and its creation.
For weeks, rumors have been floating around the internet suggesting researchers might finally have detected gravitational waves, but no one was sure until now when researchers confirmed that they were to make an announcement in the next couple of days.
This preannouncement has scientists all around the planet extremely excited since a discovery of this caliber is unprecedented.
The revolutionary discovery could help scientists observe parts of the universe that have remained in the ‘dark’, hidden from conventional telescopes that use visible light, radio waves and X-rays.
However,
not only might the discovery allow scientists to better explore the universe, it might also allow them to see black holes ‘directly’ for the first time,
something that could help them unravel the mysteries surrounding dark matter, the invisible material that is believed to make up about 80 percent of the known universe.
[ALBERT EINSTEIN]
“This year marks the 100th anniversary of the first publication of Albert Einstein’s prediction of the existence of gravitational waves,”
the release notes.
“With interest in this topic piqued by the centennial, the group will discuss their ongoing efforts to observe gravitational waves.”
The event believed to announce the detection of ‘ripples in the fabric of spacetime’ will be hosted on Thursday afternoon UK time, at the National Press Club in Washington DC.
More information can be found by clicking here, and visiting the LIGO website.
SOURCE
We may even have seen a simulation of colliding black holes at the Super Bowl (halftime)... 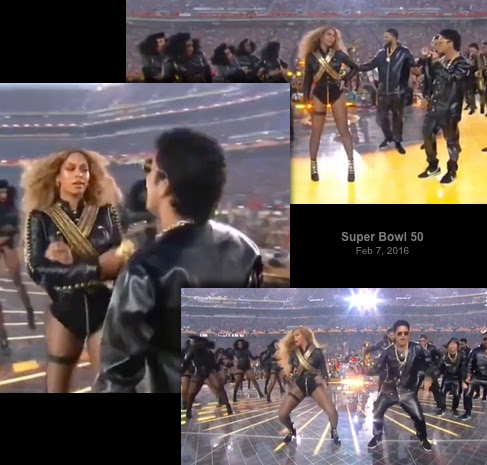 Two "black forces" did collide in the form of Beyonce (and her all-female, all-black dancers dressed in black)
and
Bruno Mars (and his all-male, all-black dancers dressed in black) aggressively walking toward each other from opposite sides of the stage for a dance-off...
where a black hole-like vortex ignited and released energy ("gravitational waves"). 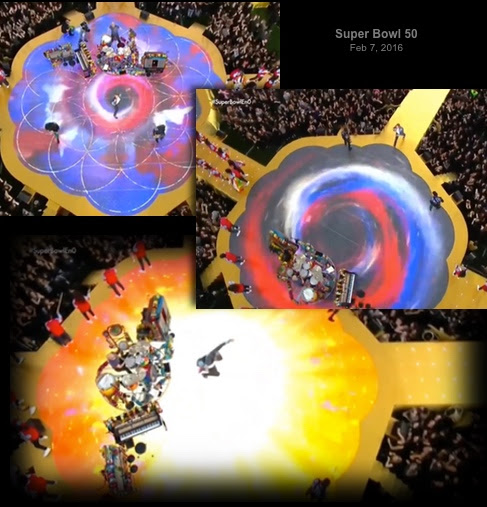 Planet X/Nine, gravitational waves, perhaps to be followed by a confirmation of CERN's possible LHC discovery announced back in December potentially having to do with dark matter,
hidden dimensions,
and/or... graviton.
Also the issue of the blinking star/alien megastructure but that's for another time... 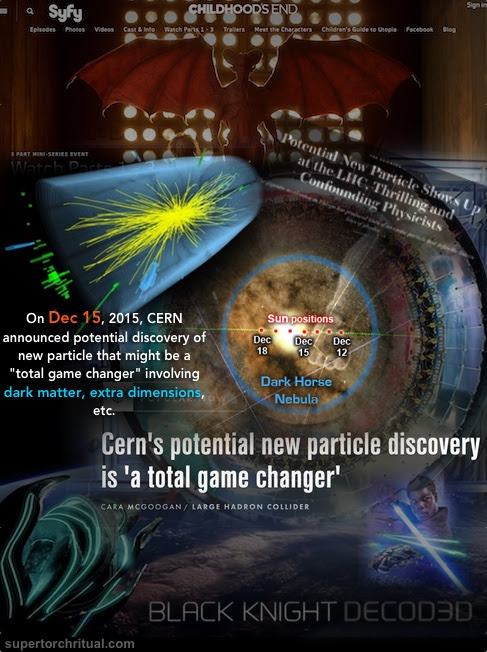 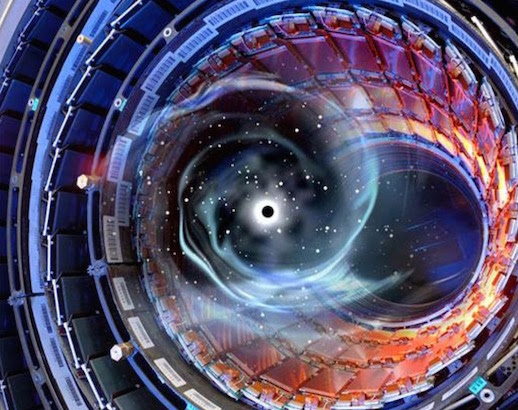 Hello from the other side...
Seems we are entering a period of dark and heavy stuff coming out of the "Underworld".
Are you ready? 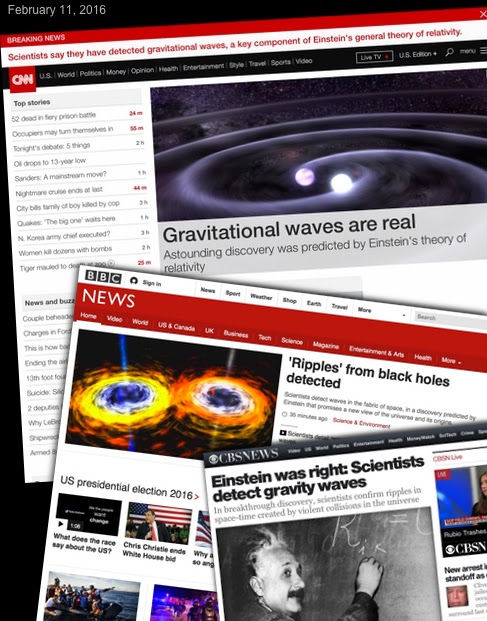 WAKE UP TO TRUTH while you still have time!