The Hollywood Film “Brick Mansions” was set in Detroit.  And so why, in the middle of the film, is an image of a nuclear missile that is aimed at downtown Chicago, inserted?  The answer is simple – it is ‘predictive programming’ for the coming Nuclear False Flag Attack on the City of Chicago.

Rahm Emanuel was Obama’s Chief of Staff.  Rahm resigned to take the lesser position of Mayor of Chicago, as part of a special Government plan.  This image reveals, how close Rahm Truly is to the insane Antichrist dictator in The White House.  And so why would he want to leave, to take a lesser position? 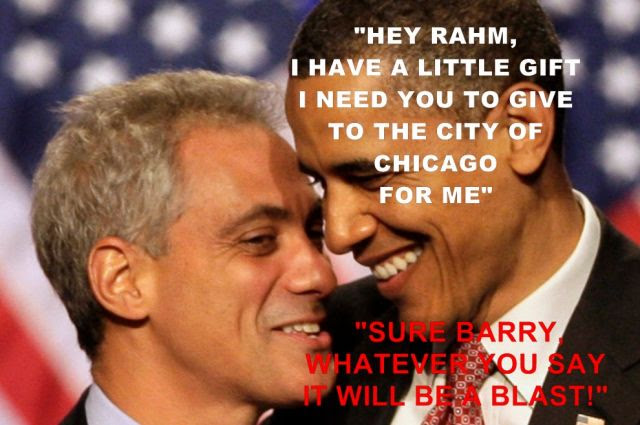 The real reason Obama sent Rahm Emanuel to Chicago, is blatantly revealed in the movie, when the actor playing the mayor, utters the following declaration (at 78 minutes), 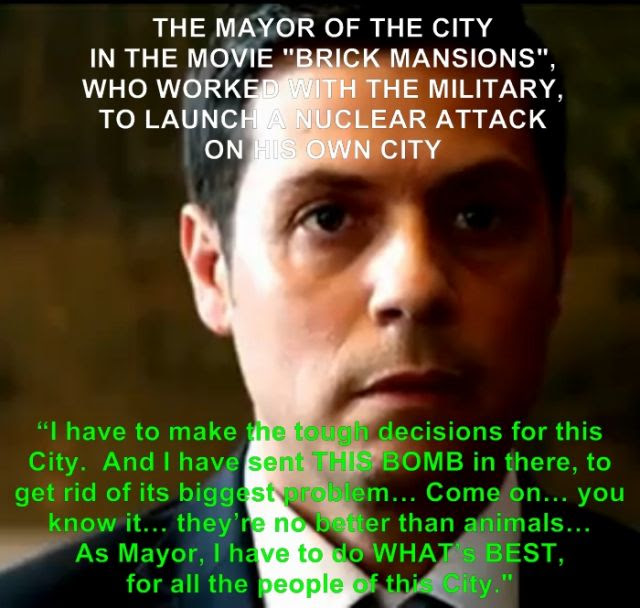 “I have to make the tough decisions for this City.  And I have sent THIS BOMB in there, to get rid of its biggest problem… Come on… you know it… they’re no better than animals…  As Mayor, I have to do WHAT’s BEST, for all the people of this City. The hard working ones (interrupted by, “You mean THE RICH ONES” – a reference to the illuminati elite) – the ones who contribute… the ones who are sick and tired of this cesspool”

The big smoking gun, in this illuminati PSYOP, that reveals it is in fact predictive programming for the coming Nuclear False Flag Attack on Chicago, is easy to see. 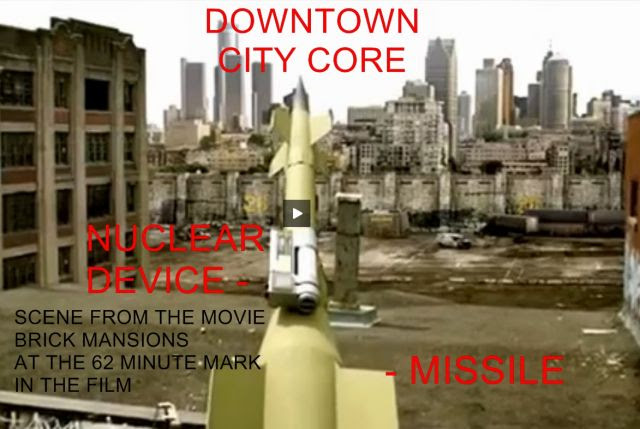 At the 62 minute mark in the film, just after showing an image of a nuclear missile pointed at the downtown core of the city, there is a massive zoom out shot – but the further the camera zooms out from the shot, the more obvious it is, that THIS IS THE CITY OF CHICAGO, and NOT the City of Detroit. 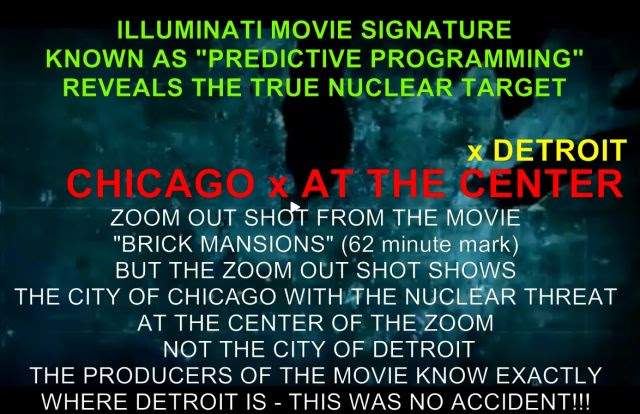 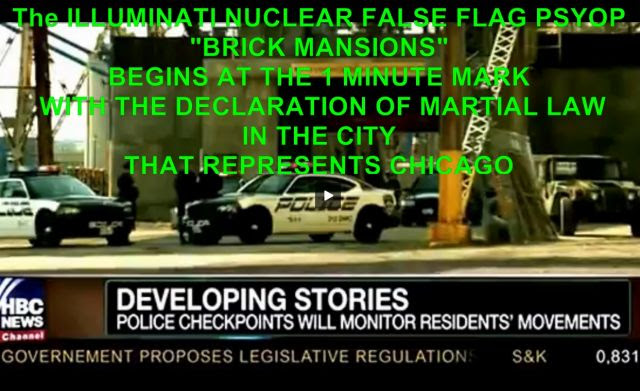 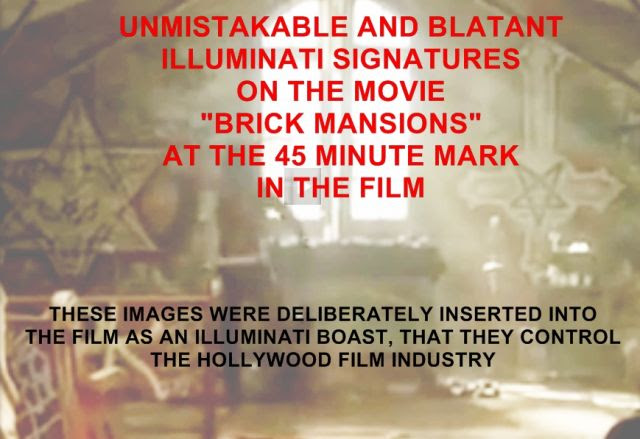 But can there be yet another motive, that the illuminati have for Nuking Chicago?  That motive is revealed at the one minute mark in the movie.  The Mayor of the City explains that the purpose of the nuclear attack on Chicago, is to clear the land, for the “ILLUMINATION”, of a new construction development. “Gentlemen, this development is ‘a beacon of light’, in our dark city… situated on THE MOST VALUABLE PROPERTY, that this city owns.”  Now in the movie, the property is actually a slum.  But the most valuable property in Chicago, is the downtown core of the city.  And in the movie, at the 62 minute mark, the nuclear missile, is clearly pointed at the downtown core, of the City of Chicago – the city indicated by the zoom-out shot. 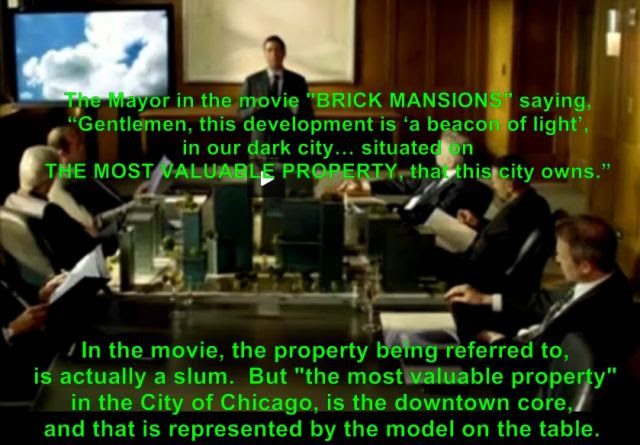 There are numerous other parallels in the movie to the City of Chicago.  There are numerous other signs in the movie, that it is in fact, NOT a movie about Detroit, but is in fact, entirely about the City of Chicago.  However, it is always good to leave some work for the other TRUE REPORTERS out there.  And so we have done just that.

You Can see how the City of Chicago falls at Ground Zero – at the Center, of the Illuminati Star that has been placed over North America, by the illuminati – at the following link: 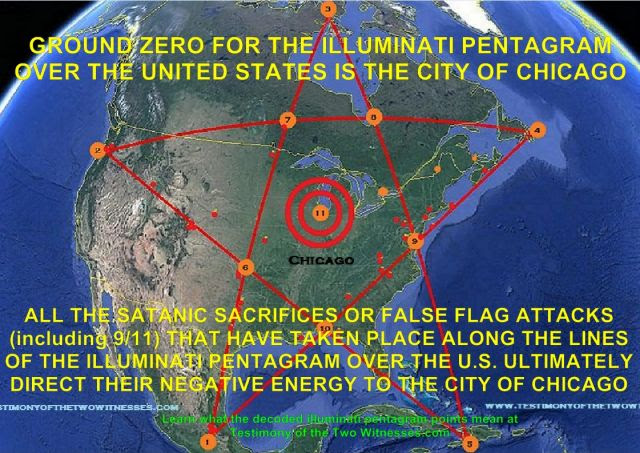 Find out what each point on the illuminati star specifically represents, at this following link:

It is common knowledge that “Brick Mansions” is the last movie that Paul Walker finished filming.  And now that the illuminati involvement in the film is undeniable, the question remains:  Did Paul Walker meet ‘an untimely fiery death’, in the same way that reporter Michael Hastings did?  Was Paul Walker’s death, the result of deliberate tampering with the vehicle he was riding in?  The illuminati have been involved in countless human sacrifices in North America over the past 50 years, and so that possibility can never, be fully ruled out.

Once the Chicago Nuclear False Flag Event takes place, all evidence of the U.S. Government Plan to annhilate their own people – evidence like this article, will likely be blocked from the internet.  And so we now encourage you, to copy this article, with HIGH DEFINITION photos, from the following link, onto a Word program on your computer, for future reference.

INTERESTING STATISTIC:  THE VIDEO “BRICK MANSIONS”, WAS PULLED FROM THE MOVIE STREAMING WEBSITE “MEGASHARE” THE SAME DAY THAT THIS ARTICLE WAS POSTED ON B.I.N. – AND THE MOVIE IS NO LONGER VISIBLE ON THE MOVIE STREAMING WEBSITE “PUTLOCKER” EITHER.  THE ONE WORLD GOVERNMENT DOES NOT WANT YOU TO VERIFY THE VALIDITY OF THIS ARTICLE  – AND THEY ARE DOING EVERYTHING IN THEIR POWER, TO KEEP YOU FROM THE TRUTH THAT HAS BEEN REVEALED.